The Making of "The Bath Crone," Pt. 1: Overview

I started working on "The Bath Crone" in 2016 and it's 2018 as I'm writing this. It's finally done! Though it takes only a few minutes to read, it took a very long time to make, and it's hard to believe how different my life is now than when I first started thinking about 3D comics. There's plenty of people who spend years working on art that only takes minutes to experience, even moments, but it's a first for me, so I thought I'd share a bit about what went into it and why I even bothered.

(If you haven't read "The Bath Crone" yet and are reading this post you can see it here, free of charge. Like I said it'll only take a few minutes out of your day, but if you can't right now then feel free to keep reading-- I won't get into specifics about the comic in this post.)

It started as an off-hand conversation with my friend Tony, about a specific panel from Scott McCloud's "Reinventing Comics," which I was reading at the time. This was the panel I sent him: 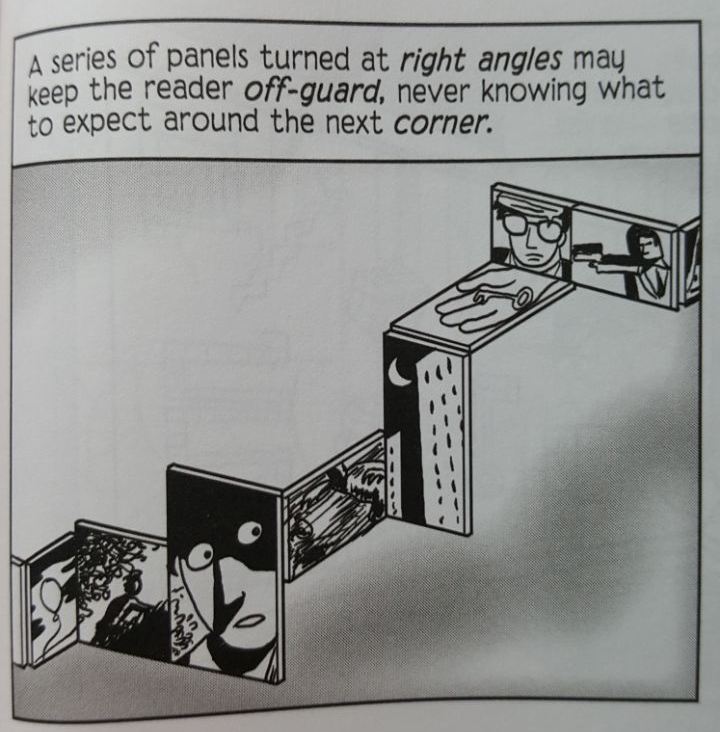 It's from a sequence about the possibilities of the "infinite canvas," Scott McCloud's term for the extension of comics beyond the limitations of print media. I showed Tony the panel because it seemed like a neat enough idea, and easy enough to do in the age of Unity. He looked at it and was unimpressed. What would be more impressive, he said, was a fully 3D comic. He pictured it and said that it would be a chaotic mess, but the idea excited me and I told him I would try to figure out a way to make it work.

I spent some sleepless nights excitedly writing out a proposal for Tony, laying out exactly what a fully 3D comic would look like. The proposal document is an interesting--and frequently embarrassing-- mess, full of digressions, boneheaded ideas, and terrible illustrations, all in an unwieldy, hard to distribute format. But despite all that, it has never failed to make the people I've shown it to excited about the possibilities of 3D comics, so I think it served its purpose. More importantly, it gave me a place to work out my unclear ideas into something more concrete-- the main ideas behind 3D comics all either arrived or solidified while I was putting that document together.

With the rush of writing the proposal and Tony's approval I decided that this 3D comics idea was something exciting, maybe even something I was willing to dedicate my life to. I set out trying to make my proposal a reality, but it was slow going. The major obstacles were that I knew next to nothing about 3D, didn't really know if any of this 3D comic theory would work in practice, and had no story of a sane size I wanted to tell. So what followed was probably almost a full year of dicking around, slowly learning the technology and technique of 3D games, trying things out to see how they felt, and bothering Tony with story ideas that I never even started on.

Along the way I made another document like the first, except this one was a walkthrough of a hypothetical game, incorporating various new ideas that had occurred to me. This document was intended, again, for Tony, who had volunteered to program a 3D comics engine for me, featuring technology like portals and the ability to walk on walls, both of which I'll explain in another post.

Eventually I had gotten a decent grasp of 3D and developed aesthetic ideas particular to 3D that I think are pretty faithfully realized in "The Bath Crone." I was still uncertain about 3D comics in general, though, and also about the story I wanted to tell with them first. At the time I saw 3D comics as a whole new medium and felt a lot of pressure to pick just the right story to start off with. Also, Tony got busy with something else, and I really wanted that engine. So for all these reasons things stalled even harder.

Then I started working on "The Bath Crone." It wasn't even intended to BE a 3D comic at first, it was really just meant to be a demonstration that the aesthetic and logistical ideas I had been thinking about could work on the scale I wanted. I had modeled and painted a decent number of objects, but had never done a full scene. I was feeling like I would never actually make a 3D comic, so I just wanted to put something--anything--close to what I was imagining onscreen. I sketched the first idea for a room that came to mind and ran with it. So that's what would eventually become "The Bath Crone" started as-- just a room you could walk around in, with no narrative aspect.

The opportunity to tell a story with what I already had became obvious to me partway through the modeling process, and from there I started working on pretty much what you see now, with no major revisions. The planning, layout, and modeling did not take very long-- not sure how long exactly. I was expecting the painting process to move even quicker, for some reason, but that turned out to be incredibly naïve. The painting took up the bulk of the process. You never really realize how many sides an object has until you try to paint it.

I worked on painting this thing off-and-on for a few years until recently reaching a good enough stopping point, at the insistence of my friend sam, who said it was finished long before I was ready to stop working on it. The entire texture, including areas that might appear to be repeating, is unique and hand-painted. I'm glad I did it once, I'm proud of my accomplishment, and I think there is a more interesting quality to the texture than one that is heavily tiled. There is also a sort of beauty and simplicity to the process, arduous as it is-- a sort of what-you-see-is-what-you-get, just-start-painting elegance. However it's not a process I would recommend to anybody else, and I myself probably won't be repeating it, at least not across an entire project. For my next comic--which I have already started mocking up in a 3D program--I'm going to take a different approach, and hopefully make something a bit longer in a slightly shorter span of time.

That's the end of the story for now, but it's not the last post. In future posts I will focus in on particular aspects of 3D comics, using "The Bath Crone" as the functional example I always wanted. It's not a perfect example, though, considering it started life as something that wasn't meant to be 3D comic at all, and also its very short length. Given its nature it just can't incorporate all of my ideas about 3D comics, so I will also be using this series of posts to fill in those gaps.

I'd also like to take this opportunity to thank some people who helped me make this thing.
Thank you to Anthony Domenico, without whom this project wouldn't even exist.
Thank you to sam, who is always there for me and got me to make it over the finish line.
Thank you to Hinchy, for being my biggest fan.
Thank you to everybody who played it and gave their feedback, or who supported my idea for 3D comics in general, including Rachel Bush, Austin Amberg, T. Hubish, Sean Porter, Colin Buffum, Roan Berg, Sam Lockhart, Max and Mel Marignale-Caine, Gabriel Hinojoza, John Berge, Camila Perez, and Patrick Roesle.
Thank you to Scott McCloud, for the initial spark that got me excited about comics.
Thank you to my parents for putting up with me as I did basically nothing but read about 3D for a really long time.

(Next time: the assumptions behind 3D comics.)